Opinions are like arseholes. Everyone has one,’ bragged one of the officers to his groupie subordinates, looking pleased as punch with his smoothness.
‘Boys. It’s here. Right here where fear is,’ he said glibly pointing his stubby ringed finger at his head while the fresh recruits listened on in rapt attention.
‘I say the only race in police is khaki,’ he continued. ACP Bhonsle rolled his eyes and moved away from the group of policemen looking for last empty spots in the smoke-filled officer’s mess. It was still a Tuesday night but inside here it was always a Saturday at a cricket match. The smell of greasy burgers was over-powering and he could hardly breathe amidst the stench of the burning oil. He wondered why the café even bothered to install bins—nobody seemed inclined to use them. Spotting no empty tables, he made his way back downstairs to order his food. The young boy who took his order looked older than his years, tired, world-weary, uninterested. His order arrived, a huge veggie-burger, large fries and a chocolate milkshake. Kabir absent-mindedly popped a French fry in his mouth. It tasted as bad as it looked. Greasy, unhealthy and fattening. But ACP KabirBhonsle felt grateful that the shitty place had taken his mind off the case, even if only for a bit. Puffy faced and slack-jawed from the long hours, Shinde had slumped on the chaise lounge and dozed off.
‘Why is he sleeping?’
‘Double shifts, just a couple of hours of down time before the next shift kicks in,’ Holkar said.
‘Tell him to get up. Eat and get back to work… Shinde, chalutth!’
Shinde instantly wide awake, bounded to the attached kitchen and fixed himself a bowl of roasted dalia and milk and voraciously spooned the cereal into his mouth, before pausing to catch his breath. In response, Holkar rushed to the refrigerator, grabbed a container of orange juice and after a greedy swig childishly kept the carton for himself.
‘Excuse me—Bhonsle Sir.’
‘Not excused.’
‘Man can’t be excused to take a pisshaab?’
‘You should say take a leak bhnchot.’
‘Leak…piss yapishaab … matlabmootne se hai. Gooooingsir….’
Kabir shrugged while gulping down his now cold burger with the tepid fizzy.
‘Sir, the content of the Panvel farmhouse lockers.’
‘Found anything?’
‘Same thing. Naked photos of girls and boys. And lots of photos of Dannie.His niece. Remember Dannie?’
‘Yes bhenchodI remember Dannie.’ Bhonsle regarded the huge stash of photos and tapes and private letters dumped onhis table. Pausing for a moment, Kabir pored over Dannie’s pictures, as a child of three, five, ten. Even as a child it was evident that she had uncommon beauty, indicative of the star she would become. And one of the most sculpted heads he had ever seen.
A pale-faced office-boy shovelled into the room listlessly trying to figure out where to place even more sealed packets on the already full table.
‘Abbey kya?There is more stuff? Motherfucker keep it on the table—let me finish this crap first.’
‘Anything important?’
‘Boy photos, girl photos, more chics…pervert faggot…stubs of cheques, papers with studio addresses, producer details, too much useless information.’
‘One thing is for sure. Mr. Unpopular had an unending list of people who had a bone to pick with him.’ Kabir regarded the exhaustive material in front of him taunting him with its hidden truths and wondered just what had he succeeded in establishing? He impatiently waved to the skinny office boy signalling him to dump some more courier packets on the table and instantly felt bad for snapping at the boy. Poor sod. A late-night shift was no beachwalk in a station full of grumpy policemen. They were all snappy and tired and angry, at having to rework the summary, when all they wanted to do was to hit the field, down stiff ones, crack the case and head home. Not necessarily in that order.
‘Hey boy! Come back.’ The thin pasty-faced boy, unnerved by the sight of scores of angry men in khaki looking pissed like hell, looked like this was the last place he wanted to be in. ‘Boy don’t be scared. Take this money and buy yourself something to eat. And that’s an order—’ His men guffawed as the boy snatched the money from ACP Bhonsle’s hands and almost bounded out of the room.
‘Back off…! The poor boy was scared shitless.’
‘Hey give me a knife. Maadachotthis is tight—letter bhibhejengey chain lagaakar—’
Kabir struggled with the last remaining bundle and finally managed to open it. More photos. Shit.
‘Ayuuuikk?Whathefuckkkk is this!!’
Kabir stared at the photos, but nothing made sense for some time. He sat stunned for a moment, trying to understand what he was seeing. Then with a loud expletive which surprised the assorted men in the room, ACP KabirBhonsle’s team saw him doing the fastest sprint out of the room yelling at the doorman to stop the office boy.

‘HEYY GET HIM!! GET THAT BOY—GET HIM !! LOOK FOR HIM—MAADACHOD HE WOULD NOT HAVE GONE FAR—’
But the thin boy had disappeared into the dark.

She had been punished long enough...she thought. There were little patches of dirty mud where she stood. The birds huddled together outside the window and stared disapprovingly. Six-year-old Sunny had been standing there for more than three hours in the suffocating heat of the garden. Punishment for wetting her bed. The sun which had been soft and harmless and a welcome end to a horridly cold night had become menacing and cruel now. It beat down on her neck and made her head swim.
But she would not move she thought. Let her Papa find her like this, she swore stubbornly.
The sweat which had gathered at the nape of her neck now dribbled down her back into the crack of her bum and then down her thighs. Sunny always waited till it reached the thighs.She had a habit of rubbing her thighs with the warm liquid in between… it felt better, since she knew that Kala, her step-mother, would get more angry, a stolen sin in the long hours of punishment. In front of her, Kala knitted non-stop on her dark wood rocking chair. The needles attached to her stepmother’s hands punctured the air around her at breakneck speed. Her eyes fixed on the little girl she created strange patterns on silk fabrics, her needles going.
—ATTACK SPLICE CUTT ATTACKK SPIN CUTT SPLICE—
When the silk got over her stepmother attacked the lowly cottons, herfingers moving with dizzying certainty. Jabbing the thicker contours of the cottons into mouldable shapes with such ferocity as if she wanted to jab out the actual essence of the unyielding raw fabric…
—SPLICE SPLICE CUTTT CUTTT ATTACKK ATTACKK—
Sunny always got frightened, and sucked her thumb when Kala started knitting and stitching. But over time, Sunny fancied she understood the language of the needles. She imagined the dancing needles were trying to tell her something. She imagined they were her friends. They warned her of Kala’s state of mind. Fast snippy ones when angry. Soft snips when calm. Uneven ones when Kala was raging. That’s when she would want to run away.
The stones now glistened moist and black and slimy from piss. Sunny felt like a voyeur of her own plight, a pretend tourist. Watching from her cot, two-year-old Dannie stared with huge bright eyes. Sunny resisted the impulse to cup her eyes against the rising sun. The silence sat angrily, making the birds in the garden even more depressed. This was the longest she had been punished, she thought chewing her lips. And she wondered whether this time Kala would punish her all night. She imagined herself as a tree. She imagined her legs slowly becoming wooden, and her soft skin turning scaly and black and hard. Maybe she was turning into a wood fairy. She imagined her legs getting sucked down into the ground and growing roots. And when her punishments used to be over, she moved around like how she thought a wood fairy should move. But today, standing in her own piss and sweat for so long, Sunny did not feel like a wood fairy, or any fairy, anymore. More like a horrid witch. Maybe that’s why she smelled so much now. She let herself go again. The muddy spot had transformed into a bad toilet, a hot fetid swamp. She knew she would have to clean the mess herself, after her quota of punishment was over. But just making Kala angry would make up for everything. It gave her a thrill of delight.
‘You had worms, this big, when I first saw your. Ate mud off the floor, little horrr!’ Kala indicated with her arms.
‘Theees big worms inside your guts. You were being eaten alive from inside! And your intestines hung out of your arsehole like a pig’s tail,’ Kala would say blackly. Perhaps she could no longer ignore the fact thatthe filthy little girl in front of her with her matted hair, all tangled with burrs, eating mud off the floor in the day and wetting the floor in the nights, was transforming into an uncommon beauty. That Sunny was becoming a carbon copy of Tabu,the woman Kala hated the most in the world.
-----------------------------------------------------------------------------------------------

Avilable for Pre-order on :

Avilable for Pre-order on : 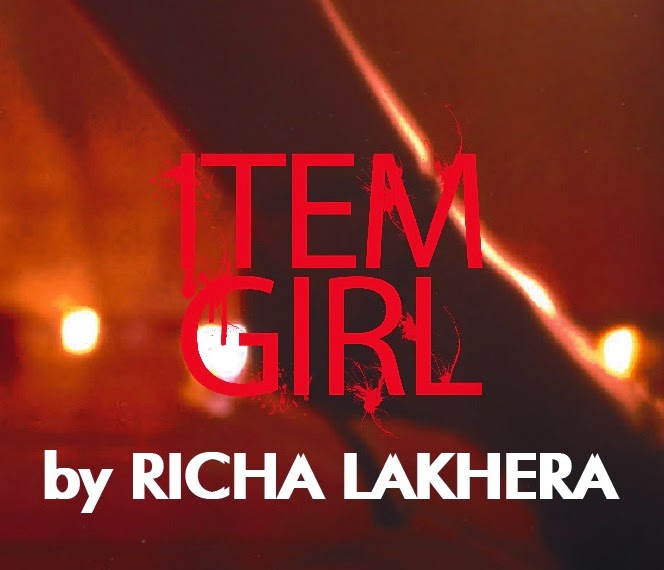 Sunheri and Suhana, twin sisters who share a horrific childhood, are caught in a vortex of pain and deceit when Sunheri, a popular item girl in Bollywood, is accused of murdering her vicious uncle and sent to jail. Suhana, an aspiring filmmaker, is determined to seek justice for her sister but Kala, their evil stepmother, makes matters worse with diabolical plans of her own. The plot thickens when three manipulative item girls—Nargis, Digital Dolly and Daisy—are identified as key eyewitnesses in Sunheri’s case.

Throw into the mix a brutal blackmailer, a cruel boyfriend, a cynical journalist who knows too much, and a hardboiled cop, and what you have is a mind-bending psychological thriller that will hold you hostage until the end.

There is not a dull moment in Item Girl, an intense, gripping account of the dark side of showbiz.
Posted by Item Girl at 1:26 pm 4 comments:

In her latest book, Richa Lakhera reveals the Item Girl, Sunny who is accused of brutally murdering her manager KD. An easy case that keeps getting complicated the more it is investigated by ACP Kabir Bhonsle, whose very first hurdle is to get the truth out of the three witness item girls. The murder trial blows off the lid from the various things that do ‘not’ exist in Bollywood such as the casting couch, the absolute power of the big studios and the length to which they would go to protect their assets. To learn more.